Cuke of All Trades!

Cuke of All Trades! is the second LarryBoy Super Short.

It is a very quiet Tuesday in Bumblyburg, especially since it's LarryBoy's birthday! The plunger-headed hero decides to go to Mr. Mahoney's bakery to see if anything special is happening, though the only thing he has to do is to deliver some letters and no one can watch over his shop. LarryBoy agrees to help out, so Mr. Mahoney leaves and tells that him to help out anyone if they need anything. 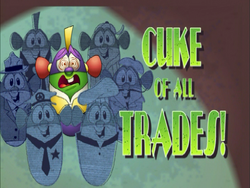