"Bully Trouble" is the first segment of "Minnesota Cuke and the Search for Samson's Hairbrush."

Junior, who is pretending to be Robin Hood, is playing with his friends, Laura, Annie, Percy Pea, and Lil' Pea, singing about how they take from the rich and give to the poor, such as money and food to all of the poor people in Sherwood Forest. However, the song is cut short when a giant green-skinned monster shows up, chasing after Junior all through Sherwood Forest. Junior ends up tripping on an apple, leaving him as an open target for the monster to jump on top of him. Back in reality, it is revealed that it was all Junior's imagination and that he and his friends are actually on the playground in the park, but Junior does end up getting sat upon by a tough-talking male gourd named Gourdon. Gourdon then asks Junior what he's doing on 'his' playground, before telling Junior and everyone else that if he ever catches any of them on his playground again, he'll pound them, like he did to Junior. Because of that, Junior and his friends are forced to leave the playground after that.

At Junior's home, Annie approaches the treehouse that Junior is sitting in, while tossing a football up and down a few times. Annie then asks Junior if he would like to come to Laura's house to play, but Junior tells her "No thanks". Annie tells him that Laura's mom is making cookies, but Junior still turns her down. Annie then tells Junior that Gourdon is "just a big ol' bully", which Junior says that he knows, before Annie asks him if he wants to tell his mom or dad, but Junior tells her that he's fine and that there's nothing to tell, but he does manage to tell Annie to tell Gourdon that he doesn't own the playground. After that, Junior then daydreams in which he is at a football game, in which he is able to effortlessly defeat a whole team comprised of bullies looking exactly like Gourdon. After the game is over, everyone cheers for Junior, before Junior's daydream is interrupted by Laura calling out to him from down below. As Junior comes down from his treehouse, Laura asks him what he was doing up there, with Junior answering that he was just thinking. Laura tells Junior that she wanted to make sure he was alright, but Junior says that he's just fine and why wouldn't he be okay. When Laura tells Junior that Gourdon is awfully big, Junior confidently boasts that Gourdon doesn't scare him, which Laura is incredulous at, before Junior asks, "What's the worst he can do? Sit on me? He already did that, and I barely felt it!" Laura then asks Junior if they could go back to the playground someday, before Junior says, "I'd go back today if you guys wanted to. He's probably gone by now anyway". Laura is amazed that Junior would actually be willing to face up to Gourdon, before Junior reiterates that Gourdon doesn't scare him. Laura then tells Junior that that's fantastic and that she'll go tell everybody, which causes Junior's fake confidence to deflate, before he dejectedly says, "I'm toast." At that moment, Junior then has another daydream, this time as a brave space explorer known as Junior Spaceman (in a nod to that of Calvin's Spaceman Spiff persona from Calvin and Hobbes). Junior Spaceman cruises through space in his little spacecraft before crash-landing on a distant planet. While doing some exploring on the planet, Junior Spaceman comes across a sign that reads, "Welcome to the Planet Sandboxian, Population: 1 big bully, leave now or you're toast". Junior then reports to his superior that he's approached the planet of "the Dreaded Bully Monster", before coming across what looks like a large purple mountain standing in his way. However, when Junior throws a rope with a grappling hook onto the mountain, it turns out that the mountain is actually a giant purple-skinned space monster, the Dreaded Bully Monster, who then starts Junior all the way back to his spacecraft. The monster then approaches Junior's spacecraft, before Junior comes back up while holding a laser, which emits a bunch of energy waves that causes the monster to become weightless and float away helplessly into space. With the Dread Bully Monster taken care of, Junior Spaceman proudly proclaims that he has saved the day once again.

However, when it seems that the monster has returned, Junior proudly states, "Thought you could sneak up on me, eh?", before his daydream ends and it turns out that Dad Asparagus was the one who had approached him. Junior then meekly tells his dad that he was just playing in the sandbox. When Dad asks Junior who Junior Spaceman vanquished today, Junior answers, "Mount Gourdon, a big old bully on a playground far far away". Junior then asks Dad if he was ever afraid when he was a kid, Dad answers that he was, saying that he wasn't always "the strapping specimen" that he is today, before saying that he remembered one guy in his class who always picked on him, even when he tried ignoring him, hiding from him, and hoping that he would go away. Finally, he stood up to the bully, before being pounded by him for it, but was never bothered by the bully again, because the bully knew that he wasn't afraid of him. Dad then explains to Junior that God hasn't given us a spirit of fear, but rather one of courage, and that if he were Junior Spaceman, he'd stand up for himself. When Junior asks "What if he pounds me, er, him?", Dad then tells him to turn the other cheek, which Junior is confused about, before Dad tells him, "Sometimes a spaceman's just gotta do what a spaceman's gotta do". Dad then also tells him that God's rule don't just work at home, but they also work on playgrounds "far far away".

Junior is left all alone, before Laura, Annie, Percy, and Lil' Pea show up, with Annie telling Junior what Laura told them. Despite the fear of Percy and Lil' Pea, and despite his own hesitance, Junior and his friends decide to return to the playground, while Dad Asparagus is happy that Junior is doing what is right. Back at the playground, Junior, Laura, Annie, Percy, and Lil' Pea see that Gourdon is not in sight, before they start to play on the playground once again. However, it turns out that Gourdon was on top of the slide, before he slides back down and lands right in front of Junior, telling him, "What did you do? Come back for a second helping of pounding?" Nevertheless, Junior, remembering what his dad told him, decides to stand up to Gourdon, telling him that no one owns the playground, before telling him that it's big enough for everyone to share. When Percy says, "You tell him, Junior!", Gourdon threatens him that he's going to pound him next, before Junior tells Percy that he's not helping. When Gourdon asks Junior who's going to make him share 'his' playground, Junior answers that he can't make Gourdon do anything, and that if he's going to pound him, he'd go ahead with it, but what's it going to prove? Junior then says that no matter what Gourdon does, it's not going to stop him, and that he'll be coming back to the playground day after day and that Gourdon will have to beat him up every day, because he's not afraid of him, before also telling Gourdon that he could just stay and play with them. After this lecture, Gourdon then tells Junior that he'll really enjoy beating up Junior every single day for the rest of his life, but Annie then also stands up to Gourdon, telling him that he'll have to beat her up to, before Laura, Percy, and Lil' Pea also stand up to Gourdon as well. Finding that he is outnumbered, Gourdon decides to leave the playground, saying that he never liked it anyway and that he's going home to play video games. Once Gourdon has left, everyone is happy that they stood up to Gourdon, with Laura asking Junior if Gourdon will come back, before Junior answers, "Well, if he does, I hope it's because he wants to be friends". Annie compliments Junior for being really brave, before Junior tells her that "sometimes, a guys gotta do what a guy's gotta do". This time, Junior once again daydreams that he's Robin Hood again, before he and his friends sing about standing for what's right even when bullies come near, knowing that they are not weak, turning their cheek, with the courage that comes from God, before the song ends. 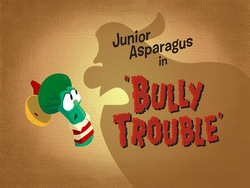 Retrieved from "https://bigidea.fandom.com/wiki/Bully_Trouble?oldid=208311"
Community content is available under CC-BY-SA unless otherwise noted.