Boyz In The Sink, often abbreviated as BITS, is a boy band from VeggieTales who first appeared in the episode The Ballad of Little Joe and have since made occasional appearances, both on CD and in episodes.

Khalil often shows up, though it's debatable if he's actually a member of the band.

They came out with an album, "Boyz in the Sink", which featured remixes of past VeggieTales songs and some original songs as well. 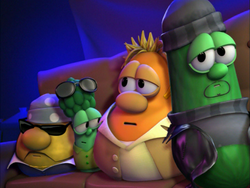 Retrieved from "https://bigidea.fandom.com/wiki/Boyz_in_the_Sink?oldid=207888"
Community content is available under CC-BY-SA unless otherwise noted.