Bob Lends a Helping...Hand? is a ZonderKidz book.

Bob asks Larry if he can help out with Joe's chores since his mom is at the doctors because she broke her big left toe. Larry agrees, so he dressed up as his alter ego Larry-Boy to fight crime, with Joe being as his sidekick Teeny-Tiny Joe!

Bob tells them that he had something else in mind; like him raking leaves and vacuuming the rugs, Larry cleaning the shed and mopping the floor, and Joe folding laundry, feeding the dog, make his bed, and dusting. But Larry-Boy insists that he should teach the spoon-less people to eat yogurt with chop sticks, while Joe can teach the fork-less people to eat gazpacho from a pan.

But Bob persuades him that he doesn't need to have super powers to be a helper, which Larry decides that he's right, and helps out the tomatoes on doing the chores. Larry now understands the kind of help that matters, but he still can't understand how tomatoes break their toes. 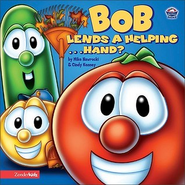 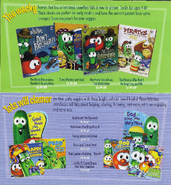 Add a photo to this gallery
Retrieved from "https://bigidea.fandom.com/wiki/Bob_Lends_a_Helping...Hand%3F?oldid=171810"
Community content is available under CC-BY-SA unless otherwise noted.