Bob's Vacation is an exclusive short from God Made You Special.

Bob is leaving for a vacation so he hires Larry to watch his house and answer the fan mail. But when he hears Larry's comments about Raymond (Bob's fern) not being special, Bob thinks he's talking about himself, feeling upset as he leaves. He offers an autograph to two ladies, but they don't pay attention, making Bob sad. Meanwhile, Larry is worried, so he hires help, but it got a little rowdy. Meanwhile, Bob tells his problem to Charlie, who comforts Bob. He then decides to cut his vacation short. Meanwhile, Larry suggests the group clean up. Then Bob arrives home and expresses his feelings to Larry, who tells him he's talking about Raymond. He also tells him what happened at the house, but Bob forgives him. Then Bob gets a verse from Qwerty and they agree with the verse, ending the short. 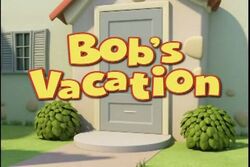 Retrieved from "https://bigidea.fandom.com/wiki/Bob%27s_Vacation?oldid=187870"
Community content is available under CC-BY-SA unless otherwise noted.