"Remember, God made you special. And he loves you very much."
— Bob while closing the show

Bob the Tomato is the host and the main protagonist of VeggieTales.

Since 1993, Bob has been the bright red, round face of the VeggieTales franchise, alongside his best friend and show co-host, Larry.

Bob first appeared in a 1992 screen test for VeggieTales called Take 38, where he attempted to do an inspirational Martin Luther King Jr. type speech to promote the idea of the new series to the viewer. Despite some silly interruptions from Larry the Cucumber, Bob was able to successfully get through his speech.

In 1993, Bob officially became the host of VeggieTales alongside his best friend, Larry. Since then, Bob has gone on to star in nearly every episode of the series.

Bob often takes on the role of storyteller and narrator, but has played a variety of roles and characters over the years. Some of his most memorable roles include The Skipper in Larry's Lagoon, Dr. Watson in Sheerluck Holmes and the Golden Ruler, ThingamaBob in The League of Incredible Vegetables, Tomato Sawyer in Big River Rescue, and Cavis Appythart in The Star of Christmas and An Easter Carol.

Bob is very much a teacher and leader at heart, having been inspired by the famed children’s show host, Mister Rogers. He is relatively calm and nice to everyone he meets, always trying to do what’s right and be a good role model. Bob's ultimate goal in life is to help kids by teaching them valuable lessons and reminding them how much God loves and cares about them.

Bob works very hard trying to be a good leader and keep things running smoothly. But when push comes to shove, he can be very high-strung and extremely particular about how he wants things to go. Bob often clashes with his friends and peers, who don’t always share his specific vision or mindset. His low tolerance for silliness can often be an issue being paired up as the "straight man" to the goofy and absent-minded Larry.

Bob has been know to get upset when things go awry, becoming irritable and a bit of a control-freak to those around him. But once Bob calms down and makes things right with his friends, he’s able to be resilient with any issues he's facing and ultimately meet his rather ambitious goals.

Bob is a bright red tomato. He has a short green stem and small green leaves sprouting out from the top of his head. He also has two egg-shaped eyes with black oval-shaped pupils and red eyelids. He has an almost perfectly round, red nose. Initially, Bob was a wider looking tomato and was more angular in shape. But as time went on, Bob lost that width, becoming almost perfectly round.

In LarryBoy: The Cartoon Adventures, Bob was among the few characters from the original VeggieTales series to be translated into 2D by artist Tom Bancroft. Here, Bob changes very little aside from the simplified "cartoony" style of the show. He wore a blue bowtie and white collar with a green eyeshade to fit into his role as Head Editor at the Daily Bumble.

For VeggieTales in the House/City, Bob was redesigned along with the rest of the VeggieTales cast. Here, he gained black eyebrows and blue irises. His eyes are also further apart, and do not extrude from his face as much. His stem and leaves were also stylized to more closely resemble hair. His body shape was altered as well, becoming wider and more angular again. His skin has also becomes more reflective and two-toned like an actual tomato. 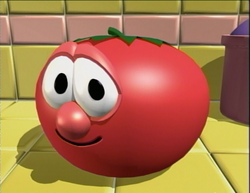