"I'm temptation, I'll simply divide and conquer. No one can stand up to me on their own."
— Bad Apple telling Curly her modus operandi

The Bad Apple (real name Bella Apply) is a villain against Larry-Boy, and is a descendant of Ephraim Apply.

Many years ago, Bella’s great uncle Ephraim Apply wanted to take over Bumblyburg by building a fun house that would distract the citizens of the town, but was banished after Obediah Bumbly stopped his dastardly plan. Now she wants to get revenge and continue her ancestor's modus operandi.

She resides at an abandoned water mill on the outskirts of Bumblyburg. She has an earthworm sidekick named Curly.

She uses temptation to subdue her enemies, such as using chocolate to defeat LarryBoy, using television to stop Alfred, using video games to stall Petunia and even using beauty to cripple Mayor Blueberry.

After her defeat at Larry-Boy's plungers, she is currently back at her secret lair planning her revenge on the Cucumber of Steel.

As a personification of temptation, the Bad Apple would rather use her manipulation to subdue her enemies. However, when she is pushed to the brick, she would not hesitate to resort to violence to get what she wants. She can even intimidate or threaten Curly to put him in his place.

The Bad Apple is a red apple with green eyelids, dark lips, and a green leaf, that reacts as hair. She also wears a belt and a green cloak.

She is very good at manipulating people after knowing their greatest weaknesses. She also wields a belt (that was likely invented by herself) which gives her spider legs, and allows her to spin webs and create worlds representing the victim's temptation.

In the trailer for the episode, the Bad Apple had a different voice than what she had in the final. David Pitts stated they tried finding the perfect voice for her character. Mike Nawrocki confirmed that Melinda Doolittle had tried out for her before. 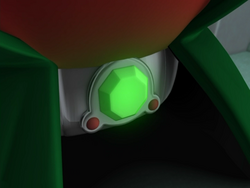 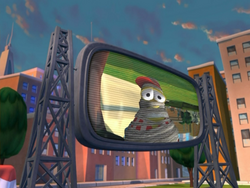