Babysitter in DeNile is the first segment of Duke and the Great Pie War.

In Ancient Egypt, a bunch of Hebrew children are playing by the riverside, while in the cattails, Miriam (played by Laura Carrot) is playing with her toy boat in the water, frustrated about what's been happening recently in her family. She suddenly hears the sound of a whistle blowing, before the Lifeguard (played by Jimmy Gourd) tells all the Hebrews to get out of the water because it's an Egyptian swim. Miriam then peeks out from behind the cattails to see the Princess of Egypt (played by Miss Achmetha) being carried towards the shore of the river. Miriam then notices that her toy boat had sailed away from her, and is now sailing right towards the Princess, so she hops out through the water after the boat, but the Lifeguard tells her to get out of the water, before the Princess' guards come towards Miriam, but she gets out of the water and starts to hop home after that.

At Miriam's house, Miriam then returns home to find that her parents are throwing a party and have invited all of their friends to celebrate the birth of Miriam's brand new baby brother. Miriam's mother then asks Miriam where she's been and that she asked her to help her. Miriam's older brother Aaron then shows up after that, telling her, "Hey, Squirt, you're in trouble". Miriam is about to tell Aaron not to call her 'Squirt', before her mother tells her that she's got a lot of responsibilities now that she's a big sister, and she has more to think about than just herself. Miriam then goes to retrieve her baby brother, before showing him off to all the guests at the party, talking about how cute 'the baby' is. At the same time this happens, two of the Pharaoh's guards (played by Jean-Claude and Phillipe Pea) hop up to the door after that. Miriam is confused about why everyone is referring to her baby brother as just 'the baby' and why they can't just call him 'he', before everyone shushes her. The baby then starts crying, before Miriam's mother tells her to feed the baby, which Miriam is not too fond of, her mother telling her that she'll be taking care of the baby while they're working, so it's never too early to learn. Miriam attempts to feed the baby, but the baby refuses, before the baby grabs hold of the spoon and hits Miriam in the face with some baby food, which everyone finds to be really cute. Miriam's mother then comforts her, telling her that that's just what babies do.

The door then opens as the Pharaoh's guards then enter the house, telling everyone to get back to work at the brickyards. When the guards notice that a brand new baby has been born, they ask if it's a baby girl, just as the camera pans over to a bunch of baseball equipment. Despite the fact that baseball stuff is for boys, the guards immediately adopt the thought that the baby is a girl before they leave, but not without one of the guards saying, "You know, statistically speaking, you'd expect to see a baby boy or two". After that, Miriam's mother then tells Miriam that she can't let the guard find out that the baby is a boy, but when Miriam asks why, her mother tells her that this is the most important thing she'll ever do, and that she'll explain later. Miriam is a little bit saddened, which her mother questions her about, Miriam answers to her mother that she never has time for her anymore before her mother says that she'd love to stay home with her and the baby but she can't, before telling Miriam to take care of herself and the baby until they get back, before she goes out the door after that. After Miriam watches her parents off, she then attempts to play with her baby brother, throwing a ball to him, but it just bounces off his head. Miriam then sourly says that she used to get all the attention before the baby came along, then picks him up, asking him "what good are you?", before noticing that he has a dirty diaper, before she starts singing about what a baby can do. However, the Pharaoh's guards hear her singing, before they come into the house again, telling her that she can't hide anything from them. Of course, when Miriam tells them she was changing the baby's diaper, this causes the guards to run out of the house in terror. Once the guards have left again, Miriam then turns to smile at her baby brother before giving him the stinkeye afterwards.

Later that night, after Miriam's parents have come home from working in the brickyards, Miriam's mother checks on the baby, before checking on Miriam after that, telling her to go back to sleep and that everything's fine. Miriam then says that she worked so hard today, to which her mother agrees with, before Miriam says that she liked it better when she was the baby, before her mother tells her that now she's the big sister and that being family means taking care of each other. When Miriam asks her mother if she still loves her too, her mother answers that she still loves her and that nothing has changed, stating that they still love for Aaron after she came along, with Miriam saying that that's different, but her mother tells her "Not at all", before telling her to get some sleep. When Miriam is asked to watch the baby again, Miriam answers that she'll do it for her mother. The next morning, after Miriam's parents and Aaron head back towards the brickyards again, Miriam is once again tasked with looking after her baby brother, but the job is still very difficult for her as everytime she tries to feed him, he keeps flinging baby food in her face.

While Miriam is sweeping up the road, Aaron tells her that she missed a spot, which miffs Miriam so much that she tells him, "Stop calling me 'Squirt'!" However, the Princess' guards are carrying the Princess down the street, with one of the Pharaoh's guards calling out that the Princess is coming through. Unfortunately, Miriam is right in the middle of the road, so Aaron quickly pushes Miriam out of the way, just as the Princess's caravan stops in front of him, which sends one of the Pharaoh's guards flying until he hits the ground behind Aaron. When Miriam asks Aaron if he's alright, Aaron answers that he's just fine, before telling Miriam to get out of there before there's trouble. The first guard is still disoriented from the impact, asking who did that, before Aaron answers that it was he who did it, to which the guards promptly punish Aaron by taking him to the brickyard, while Miriam asks Aaron why he did that, but Aaron does not answer as he gets taken away. Back at Miriam's house, Miriam's mother says that it's getting more dangerous and that it's not safe for the baby anymore. When Miriam asks what it is that the Egyptians are doing, Miriam's father says that it's time Miriam knew, before Miriam's mother answers that the Pharaoh is afraid of the Hebrews, fearing that they'll taking over Egypt, so he has ordered for his guards to take away the first-born baby boys, which is the reason why Miriam's parents have asked for Miriam to watch out for the baby, to which Miriam realizes that this is the reason Aaron watched out for her. Of course, Miriam thinks that it's silly, saying that they're just babies, before her father tells her that that's what they pray for every night. Miriam's mother then says that they can't keep the baby in the house anymore because it's just not safe, before Miriam's father asks where they can hide the baby. Fortunately, Miriam knows of a place to hide the baby.

Later, the baby is now in a basket in the waters of the river, with Miriam telling him that he has to be very quiet. Before the sound of the Lifeguard's whistle is heard once again, with the Lifeguard once again telling all of the Hebrews to get out of the water because it's an Egyptian swim. Of course, the baby then starts crying, but when Miriam shushes him, she accidentally bumps the basket, which causes it to drift out in the water away from her, as she hops after the basket, before the Lifeguard yells her to get out of the water. Miriam then hops out of the water and it seems at first she's going to abandon, but realizes that she has to watch out for her as she resumes chasing after the basket. The baby is still crying as the guards hear the baby's cries, with Miriam hopping along the side of the river after him, with the Lifeguard asking Miriam where she's going before telling the guards, "Somebody stop her!" Miriam finds herself caught by the guards, before the Princess discovers the baby, which the guards are confused about. The Princess then says that she's going to keep the baby, calling him Moses because she drew him up out of the water, before asking how to take care of the baby, which the guards have no clue about. Fortunately, Miriam tells the Princess that she can find someone to take care of the baby, which the Princess agrees with, telling Miriam to bring the baby back when he walks, before the Princess then threatens the guards that if they're ever harsh to the baby, she'll have their heads, with one of the Pharaoh's guards telling her, "I'm not sure how that would work". Later, once the baby, now named Moses, has been brought back to Miriam's house, Miriam tells her family that the Princess says that they can stay home and take care of the baby and that they won't have to work in the brickyards anymore. Miriam's family are proud of Miriam for what she did save Moses, with Miriam saying that she loves her brother, before Moses hits her with more baby food again, which causes everyone to start laughing after that. 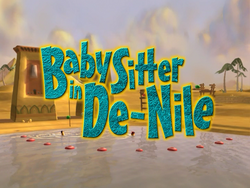 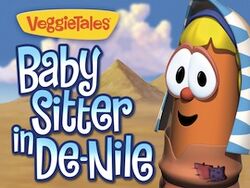 Retrieved from "https://bigidea.fandom.com/wiki/Babysitter_in_DeNile?oldid=181058"
Community content is available under CC-BY-SA unless otherwise noted.