"BING, you're a corker"
— Midgel, the Doom Funnel Rescue!

Beneficial Imprinting Neuralnet Gizmo or B.I.N.G. is a artificial intelligible robot who was built by the Cosmic Cuisinse Corporation. He is from The Benefical Imprinting Neaurnet Gizmo line.

He was given free with a prune trifle burrito Kevin purchased while Midgel was refueling the Rockhopper.

He then given to Professor Wordsworth after the Colony was destroyed.

BING is a round gray robot with one eye, yellow lining, and green lights on his sides. He has retractable arms. 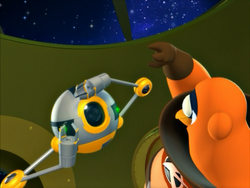