"Dance with me Lampy!"
— Awful Alvin with Lampy

Awful Alvin is one of Larry-Boy's enemies. He is the main antagonist of LarryBoy: The Cartoon Adventures.

Awful Alvin lives in an underground lair beneath the memorial statue of Sir Lester Bumbly, using the statue's monocle as a telescope to spy on Bumblyburg. He lives with his henchman Lampy. Together, they tried to find ways to defeat Larry-Boy and take over Bumblyburg.

His master plan was to unleash his armada of Angry Eyebrows to make the citizens of Bumblyburg go mad. Things go well until Larry-Boy tries to stop his dastardly deeds, and decides make him angry and still the eyebrows on him. But this fails, and commands his armada to destroy the plunger head hero.

Awful Alvin is a scallion with bushy brown eyebrows, green hair and fangs. He wears a high-collared two-toned purple Dracula-type cape, a purple vest with a black belt. He also wears a monocle on his right eye, which enlarges one of his eyes and gives him a crazed appearance.

In The VeggieTales Show, his appearance is typically the same as his original one, except his coat is now dark purple and red instead of two-toned purple, his belt is blue instead of black, and his vest is a lighter shade of purple. Part of his cape also hangs nearly halfway over his vest.

Now we shall do the Villainous Dance of Villainy to signify the imminent performance of our villainous duties.

Dance with me, Lampy! 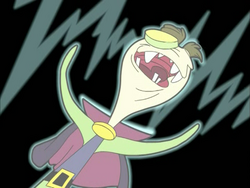