Are You My Neighbor?

"You know, sometimes differences can be good if we just take the time to get to know each other."
— Jimmy Gourd

Are You My Neighbor? is the third episode of VeggieTales. This episode focuses on the message of loving your neighbor.

The first segment is based on the biblical parable of the Good Samaritan, mixed with the style and works of Dr. Seuss. The second segment is a parody on the 1960s sci-fi series Star Trek.

Written and Directed by Phil Vischer

(See the main page for the plot.)

Written by Mike Nawrocki and Directed by Chris Olsen

The Gourds Must Be Crazy

Written and Directed by Phil Vischer

(See the main page for the plot.)

Leviticus 19:18, Love your neighbor as yourself.

Co-creator Phil Vischer had been wanting to make an episode that he could style after Dr. Seuss stories that he would read to his children, and at the same time wondered which story from the New Testament he could retell, given that his mother had suggested a policy that Jesus would not be depicted as a vegetable, and most of the New Testament besides the Gospels (i.e. the biographies of Jesus) were letters. He ended up choosing the Good Samaritan, one of Jesus' parables and it proved to be a time-consuming challenge, but in the end, proved to be very successful.

Meanwhile, Big Idea just went through some backlash from confused and disappointed fans regarding the lack of Silly Songs with Larry in the previous episode. Phil went to co-creator/voice actor for Larry, Mike Nawrocki, and told him to come up with a new silly song. While shaving, Mike looked for his razor and started singing to himself, "Oh, where is my razor?" and later suggested it to Phil. Mike was unmarried and had no children at the time, so he did not realize that children might get the idea to look for their parents' razors, so Phil suggested they find another, much less dangerous, object one would find in a bathroom, and thus Mike wrote The Hairbrush Song.

Phil then went on to make another pop culture spoof for the second segment after spoofing Gilligan's Island, this time based on Star Trek.

Main article: Are You My Neighbor?/Home Video 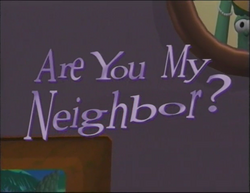 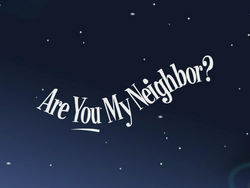