Archibald "Archie" Asparagus is one of the main characters from the VeggieTales franchise.

Archibald first appeared in VeggieTales Promo: Take 38. He at this point was an unnamed snooty British asparagus who criticized the idea of VeggieTales being a children's show. He wasn't named Archibald until Where's God When I'm S-Scared?, where he bashes Larry singing silly songs and is the actor of King Darius in "Daniel and the Lions' Den".

He is usually depicted as snooty, intolerable of nonsense, funny, or royal. He often plays as kings, geniuses, and authority figures. He is quite eccentric, to say the least. He often uses complex vocabulary, which often confuses some of the other veggies. He has shown intolerance for Silly Songs in earlier shows, but as years have gone by, he loosened up and even performed in his own silly songs.

As of VeggieTales in the City and VeggieTales in the House, he has also become mayor of the town. He apparently always makes the French Peas, Jean Claude and Phillipe, clean up garbage in the park, but never helps. But since the VeggieTales Show was produced, Archie's role of being an average character to the cast returned.

He is a tall, slender adult asparagus, as he looks similar to Mike Asparagus, but he has a long nose and wears a red bowtie and a monocle on his right eye.

Later on, in Veggietales in the House and City, he started to wear a white shirt and a dark blue garment. He also gained brown eyes.

However, in The Veggietales Show, he has switched back into his original design. 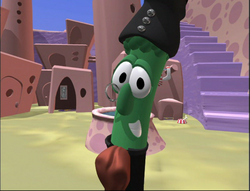