Alfred (Archie in the cartoon series) is a main character in the Larry-Boy franchise, and the faithful butler and friend to Larry-Boy.

Main Series In his first appearance, Alfred discovers the Larry signal the Bumblyburg Science Lab alerted when something from outer space landed in the city and tells his master about it, only to get knocked over accidentally.

Alfred is a tall asparagus who wears a monocle on his right eye and a tuxedo. Now he wears a suit. Instead of a bow, he now wears a tie.

He is best known for being the gadget scientist behind all of Larry-Boy's gadgets and the costumes for the League of Incredible Vegetables. Alfred is seen mostly riding his scooter whenever he travels. He also states that he is also good in biochemistry and nuclear medicine. 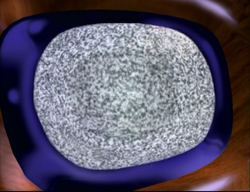 Retrieved from "https://bigidea.fandom.com/wiki/Alfred?oldid=202399"
Community content is available under CC-BY-SA unless otherwise noted.