The Alchemist (real name Edward "Cubby" Wiggins) is one of LarryBoy's enemies and Bumblyburg's Rogue Gallery.

He has a mother named Mother Pearl.

As a ambiguous youth, Edward Wiggins was a whiz in all types of chemistry, earning perfect marks on all his assignments and winning all the major science fairs. His talents were soon discovered by a group of scientists at SpourtCorp, who put him into work and Edward loved his work so much that he wouldn't trade all the beakers in the world. But that soon changed a rival company stole his secret formulas, and this enraged Edward so much that he vowed never to be used by corporate chemists. Now he goes by the name Alchemist, plans to take from others, and only thinks of himself. And of course, both and he and his mother decided to take over Bumblyburg.

For his masterplan (which of course is Mother Pearl's), Alchemist place some Ultra Sucrose Enhancement Catalyzer in the cotton candy machine at Brian's Carnival so that can lure Larry-Boy and spray him with a special chemical he made.

According to Tom Bancroft, while he is smart on scheming plans, his mother is the real mastermind behind it. The Alchemist doesn't like being called "Cubby" by his mother. Because of it, this often pushes his buttons that he's the head of the team.

The Alchemist is a carrot with a long nose and big eyebrows. He wears a green gown and hat, with a dark green cape and vest, and a dark green belt with an "A". He also wears glasses and has robotic arms.

As stated in the bio, the Alchemist is a master of chemistry, and thinks very he's smart (although his mother is the true mastermind.) He wears a trick flower which contains his own dastardly chemical.

In Bumblyburg Map, it mentions he can make excellent coffee. 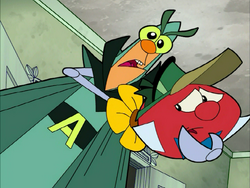 Retrieved from "https://bigidea.fandom.com/wiki/Alchemist?oldid=207113"
Community content is available under CC-BY-SA unless otherwise noted.