"When you know God made you special, it doesn't matter what anyone else thinks, you can just be yourself!"
— Mr. Butterbun to Dr. Jiggle

A Snoodle's Tale is the twenty-second episode of VeggieTales.

On the Countertop, Bob is all alone, setting up a "Welcome Home" party for Larry the Cucumber, who is returning home from Danish Immersion Camp. As Bob readies himself after the bus comes over, Larry arrives on the Countertop with Bob yelling "Surprise." This confuses Larry, asking if there was supposed to be a huge group of people in a surprise party, to which Bob says that he was the only one in the party. When Larry notices the welcome home sign, written in Danish as "Velkommen Hjem, Larry," he doesn't pronounce it in proper Danish, which Bob points out to him. Larry then explains to Bob that he didn't actually go to Danish Immersion Camp, having only been there one day, before he and a kid named Bjorn took a canoe ride and wound up at another camp called "Overdone British Literary Adaptations Camp." This makes Bob very frustrated, telling Larry that he had a story arranged, which involved a Danish truck driver named Jorgen and his pet monkey (in a similar matter as that of B.J. and the Bear, as Larry points out), and that Larry was slated to play the part of Jorgen. When Bob is upset that Larry didn't actually learn any Danish to play the part, he despondently wonders what he's going to tell Chester, which was the name of the kid that they got a letter from. Chester explains in his letter to both Bob & Larry that all of the kids at his school like to call him nasty names and they tell him that he is not good at anything and wonders if he really is special. Even in spite of things not turning out the way Bob wanted them to, Larry has a backup plan, deciding to tell Chester the story of "Dr. Jekyll and Mr. Hyde," to which Bob is concerned that that story is a little scary, but Larry tells him that "if you change things around a little bit, I think we have a story that Chester will enjoy," before telling Chester to get ready for "Dr. Jiggle and Mr. Sly."

Bob then reads from a book a story about the Snoodles, "a curious folk who eat pancakes and noodles and spend half their days making sketches and doodles and cutting their hair into shapes like French poodles." In Snoodleburg, the hometown of all of the Snoodles, there is a large tower in the center that produces a new Snoodle "every fourth Tuesday at quarter past nine." One day, a brand new Snoodle, named Snoodle-Doo, is born, before he starts wondering what his purpose is. Inside the pack on his back, Snoodle-Doo discovers some paints and a Snoodle kazoo, before discovering a string, to which when pulled, causes a pair of wings to pop out. Snoodle-Doo then decides to show all of the other Snoodles what he can do. First, he tries to fly, but he doesn't fly very high before he falls back to the ground, before the Snoodles make fun of him for not being good at flying. One of the Snoodles then paints a picture of how silly the young Snoodle looked before placing this picture in his backpack.

Snoodle-Doo is sad that he's not very good at flying, before he notices a bunch of beautiful flowers, realizing that he can paint a picture of the flowers, claiming that he's got more than wings. After the picture is all painted, Snoodle-Doo then shows the picture that he painted to the other Snoodles, who admonish him that he's no better at painting than flying. Another Snoodle paints another picture of Snoodle-Doo and places it in his pack as well, before the Snoodles all tell him, "You're puny, you're silly, you're not all that smart, you can't use your wings and you're no good at art!" Snoodle-Doo then decides to leave Snoodleburg to find another place to live. After traveling for a while, Snoodle-Doo decides to take a break, but he ends up falling forward when he attempts to sit down, before being approached by a Snoodle farmer who also paints a picture and places it in Snoodle-Doo's backpack. Snoodle-Doo then asks if there's any place where he can truly be alone, before looking up to see two birds flying across the sky, so he decides to climb up the mountain peak of Mt. Ginches.

After tirelessly climbing up the mountain, Snoodle-Doo then makes it to the top, where he is suddenly approached by a kindly stranger who invites him inside his home on top of the mountain. After entering the stranger's home, Snoodle-Doo is given a cup of tea, before the stranger asks him what brings him to his home. Snoodle-Doo then explains that he ran away because all of the other Snoodles make fun of him because he cannot do all of the things that they do, while also gesturing to the pictures that were placed in his backpack. The stranger then removes the pictures from Snoodle-Doo's backpack, saying that they do not look a thing like him, before he tosses the hurtful pictures into the fire. The stranger then shows Snoodle-Doo a picture of what he really looks like, showing him a picture of a Snoodle who looks older and much stronger. Snoodle-Doo is amazed to see this picture, saying that he would love to believe, but he's afraid.

At that moment, the stranger then tells Snoodle-Doo that he knows who he is because he made him. He also explains that he built the tower, planted the bushes and flowers, put the fish in the ocean, and that he feeds the birds. The stranger also adds rather sadly that the Snoodles just use their gifts to make others feel bad. Snoodle-Doo then asks the stranger that if he made the land, couldn't he make Snoodles obey his command? The stranger then answers that a gift that is commanded is no gift at all, and that he wants Snoodle-Doo to not just fly, but to soar, at the same time that he places the inspiring picture in Snoodle-Doo's backpack. Snoodle-Doo then asks how he can fly with the picture in his pack, before the stranger tells him that this is a special picture. When Snoodle-Doo looks down, he sees that he is now a few inches off the ground, before he quickly flies out from the stranger's home and he quickly flies back towards Snoodleburg and meets up with all of the other Snoodles who feel ashamed of how they treated him. All of the Snoodles listen to Snoodle-Doo's story and then they all start to fly across the sky as the story then comes to an end.

After the story is finished, Larry praises Bob for the story, to which Bob is flattered by, saying that he did go to "Overused Literary Emulation Camp," before Larry states that there was something about that story that made him want to eat green ham. Bob is a bit suspicious before quickly saying that they're over by Qwerty to talk about what they've learned today, before the "What Have We Learned" song plays, which in a rare uncharacteristic moment, Bob dances to. Larry then adds "And eggs, eggs too," before the song resumes again. After the song ends, Bob then explains that the little Snoodle got weighed down by all of those pictures that the others painted of him, just like the names people call us make us feel terrible. Bob then explains that like the Snoodles, we have a creator, because God made us and when we know what he thinks of us, and how he sees us, it doesn't matter what anyone else says. Larry then asks Qwerty if he can show them what the Bible says, before Qwerty brings up the verse, which is:

"I praise you because I am fearfully and wonderfully made."
— Psalms 139:14

Bob then tells Chester that all of those nasty kids at his school can only see the way he looks at the moment, but God sees him the way he's meant to be and that he's much smarter, stronger, and braver than he thinks and that God has given him amazing gifts. When Bob asks why, Larry quickly says that he knows why, which is "God Made You Special, and He Loves You Very Much," with Bob adding that he wants you to paint, sing, and soar, and Larry adds, "and maybe even dance." When Bob tells Larry to say goodnight, Larry says "Farvel!," which he says that he learned before the canoe trip (after that the audience thinks that Larry is still thinking about his time in Danish Immersion Camp, much to their confusion), before the show ends. 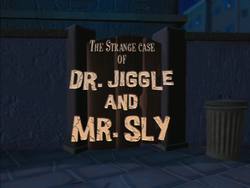 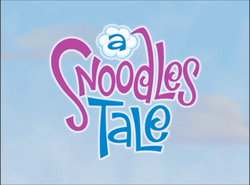