A Polar Pickle! is the third LarryBoy Super Short.

The two penguins run away again, but LarryBoy soon catches up to them. However, they turn out to be on the other side of an ice wall. LarryBoy uses a hair dryer to melt the ice, but the steam from the hair dryer triggers a smoke alarm, which causes water from the sprinkler system to fall on LarryBoy and instantly turn into ice, therefore freezing him. 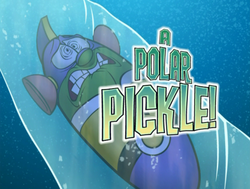