A Mess Down In Egypt

2 minutes, 18 seconds
A Mess Down In Egypt is the 21st Silly Song and more like a lesson song and the second one done by the Boyz in the Sink.

Announcer: And now it's time for "Silly Songs with Larry", the part of the-

Mr Lunt: Check it, V.O. Dude. Yo, me and the Boyz had an idea about another way to tell this Moe story. Right, Boyz?

Boyz in the Sink: (offscreen) Yo!

Mr Lunt: Yo! Listen to the boys and we'll tell you

Mr. Lunt: How loosin' your cool and having a

Mr Lunt: Can run you out when your lid gets flipped, and get your mug up all over Egypt!

Mr. Lunt: On the banks of the Nile, born and

Mr Lunt: In the crib of the Pharaoh in his teenage

Mr. Lunt: Started whoopin' it up-

Boyz: On his homey Hebrew!

Mr. Lunt: Coulda called the cops, stood back but instead -

Boyz: He took a big stick upside of his head!

Mr Lunt: Now word spread fast and he got all scared.

Mr. Lunt: He'd be better off by avoiding the Pharoah(oh). He packed his bags, thinkin' if he stayed they'd be punishing him in a capital way!

Mr. Lunt: Now Lord only knew, but He thought He might-

Boyz: Stay a while in the desert like a Midionite.

Mr. Lunt: To disengage his rage and become equipped to return to his home as the prince of Egypt.

Bob: Uh, no. Let's stick with the Western.

(Larry puts on his cowboy hat) 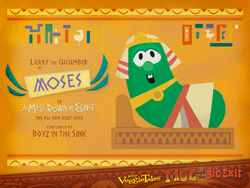 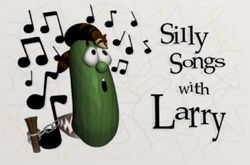 Retrieved from "https://bigidea.fandom.com/wiki/A_Mess_Down_In_Egypt?oldid=210127"
Community content is available under CC-BY-SA unless otherwise noted.